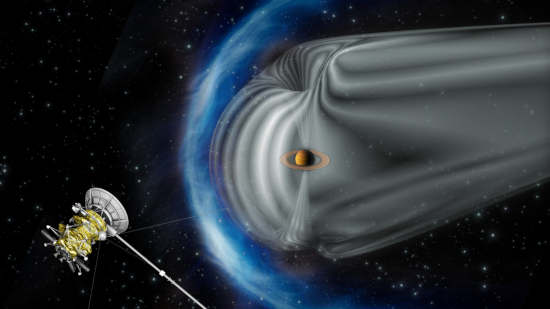 
The Cassini-Huygens space mission was a joint endevour of NASA and ESA, with alltogether 17 countries, including Hungary. Its main target was Saturn and its intricate system of rings and moons, where no orbiting unit was placed before. Prior to Cassini-Huygens we only had a few close glimpses of this gas giant and a few of its satellites thanks to the Voyager probes and Pioneer 11.
Cassini arrived at Saturn in July 2004, and continued its measurements for more than 13 years. During that time it had multiple close flybys at Titan, Enceladus, and other satellite targets never before seen from such a close distance. It had also completed the mission of releasing the Huygens probe, which conducted its historic landing on the enigmatic Titan in January 2005. The mission in all provided invaluable knowledge of Saturn and its environment. The mission finally ended in September 2017, when the Cassini orbiter was steered to descend below the clouds of Saturn, and burned.
The Hungarian scientists and engineers of our institute contributed to the building and testing of two onboard instruments of the Cassini orbiter. One of them was the Cassini Plasma Spectrometer (with Karoly Szego as CO-I), which consisted of three sensors, the Ion Mass Spectrometer, the Electron Spectrometer and the Ion Beam Spectrometer. The other instrument that we had contributed to was the Magnetometer (with Geza Erdos as CO-I). In 2003 Zsofia Bebesi had joined the team as PhD student and defended her Cassini related thesis in 2008.
Our scientific studies on one part were focusing on the plasma environment of Titan, its induced magnetosphere, and its interactions with the surrounding magnetospheric plasma and magnetic field of Saturn. We also studied the structure and physical properties of the Kronian magnetodisc. Furthermore some studies were conducted concerning the upstream properties of the foreshock region, the evolution of the ULF waves into upstream structures.