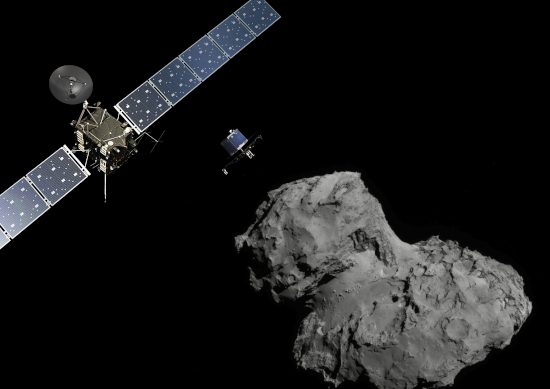 The Rosetta space probe, along with its lander module, the Philae, was launched on 2 March 2004 as part of the European Space Agency's Horizon 2000 program and began its ten year long journey towards comet 67P/Churyumov-Gerasimenko. Rosetta arrived to 67P in 2014, and with that, it became the first man-made probe in human history to orbit a comet. In addition, the Philae successfully completed the first soft landing on a cometary nucleus on 12 November 2014.

The mission was carried out with the help of significant Hungarian participation. The Wigner Institute participated in the development of the Rosetta Plasma Consortium (RPC) of the orbiter and the Command and Data Management System (CDMS) of the Philae lander.

Our scientists investigate the characteristics of the induced magnetosphere of the comet, paying special attention to its diamagnetic cavity.


Our selected publications related to Rosetta